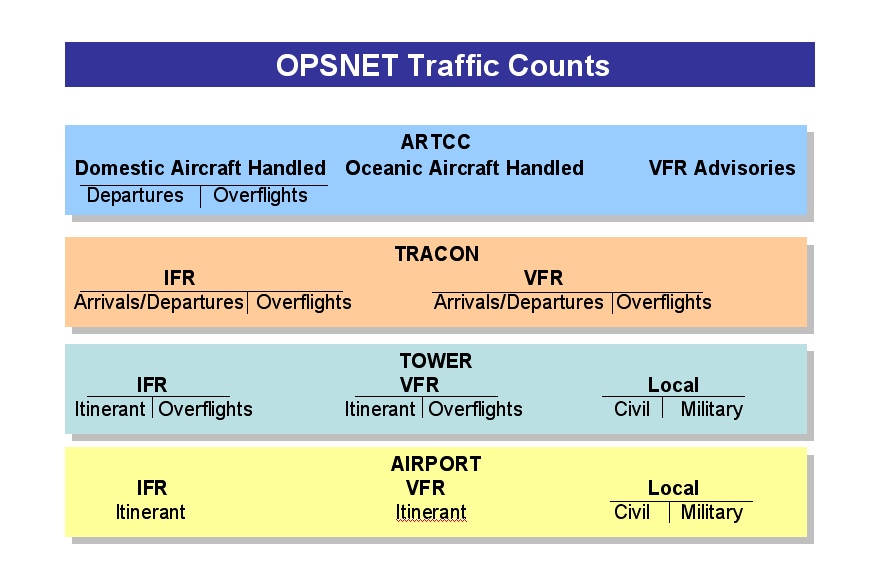 The Operations Network (OPSNET) is the official source of NAS air traffic operations and delay data. The data collected through OPSNET is used to analyze the performance of the FAA's air traffic control facilities.

The data sent daily to OPSNET can be viewed on the FAA Operations & Performance Data Web site.

To access next day OPSNET data, users require a login. Without a login, users can access finalized OPSNET Operations and Delay data for each month on the 20th of the next month; i.e., June data are available on July 20. OPSNET records the following information and data:

From October 22, 2007 and in accordance with FAAO 7210.55E (now replaced by FAAO 7210.55F), all ATC facilities with the exception of flight service stations (FSS) are required to record OPSNET data and transmit data to the ATO System Operations, Quality Assurance (QA) office at the David J. Hurley Air Traffic Control System Command Center (ATCSCC) daily. The ATCSCC QA then processes the data and stores them into the OPSNET database.

In 2008 the FAA revised the procedures and methodologies for reporting and tabulating both air traffic counts and delays in the Operations Network (OPSNET). The updated delay reporting rules attribute delays to both the facility that caused the delay impact, and the facility at which the delay occurred. The revised OPSNET operations reporting began July 1, 2008, and the revised delay reporting began October 1, 2008. Historical OPSNET operations data dating back to FY 1989 and delay data back to FY 1999 have been converted to be consistent with the revised reporting standards and are available in the ASPM OPSNET module.

OPSNET operations and delay data are updated daily for the previous day.

To allow for compatible comparison analysis, legacy OPSNET delay data dating back to FY 2000 have been standardized to meet the revised delay definitions. Airborne delays that were reported prior to October 1, 2008, and which were allocated to airports and reported as “arrival delays” are now allocated to the ARTCC or TRACON that reported the delay.